You are here: Home / The book “Tales out of this town. The story of Wroclaw children “ 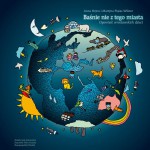 The book “Tales out of this town. The story of Wroclaw children “contains 12 tales provided by the 12 families living in Wroclaw, differing in ethnicity, nation, religion (fairy tales: Japanese, Azerbaijani, Ukrainian, Palestinian, Roma, French, German, Czech, American, Polish, Cameroonian, Hindu) . Its main characters are children those families of children who act a double role: both narrators of fairy tales, and “guides” in their culture. Each chapter consists of a photo portrait of a given child, his/her short presentation (taking into account the specificities of the country of origin – such as name meaning in a given culture, information about the child’s language, specific traditions, etc.) and his/her narrated tales.

The book has great symbolic capital. Its goals relate to education and intercultural mediation: the Polish majority will realize the existence of minorities, will know their ways of life, customs and cultures, while immigrants will be invited to dialogue and assimilation with the indigenous inhabitants of the city. The missionary nature of the publication imposed the manner of its distribution – the book went primarily to educational institutions (the Public Library in Wroclaw, Wroclaw Puppet Theatre, Wroclaw schools, kindergartens and community common-rooms) and to individual customers (primarily through various competitions in the media).

The patronage of the project was undertaken by the Children’s Ombudsman of Republic of Poland.

From the letter by Marek Michalak, the Children’s Ombudsman:

“It’s hard to imagine a better way to show the youngest, how diverse is the world around us, yet how a lot in common the people differing in origin, language and religion has. I am confident that this publication will teach young people tolerance, respect and openness to people, and that they will stimulate curiosity and encourage to learn more about other cultures. “

“Tales out of this town. The story of Wroclaw children “is a free publication. The book will be available in all children’s branches of the Public Library , it will also be distributed through competitions organized by the project partners: Empik, National Museum, City Museum in Wroclaw, Wroclaw Puppet Theatre. Books will be transferred to Wroclaw primary schools and kindergardens. More information and contact on the distribution of the books: www.bajkibezgranic.org